Made In Taiwan Part 2 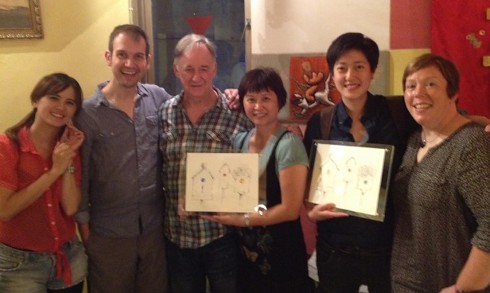 It has been a busy week here in Taipei. We have been performing at the Wellspring Theatre for the past six days. Every morning we take the metro and jostle with the commuters to journey from our hotel to the theatre in Gonguan, an area in the southern part of the city.The theatre is located on the tenth floor of a local government building where the security guard who sits on the main door of the building appears to have perfected the art of upright sleeping. Every morning we arrive to find him bolt upright but with his eyes firmly shut. In fact snoozing is a key factor in Taiwanese life. Everywhere you go you see people grabbing a quick sleep – sometimes in the most unexpected places and positions. Maybe it’s because the working day is longer here, the commute is often bigger and the heat has a lot to do with it. It’s averaged 35C while we have been here. Also Taipei is in a natural basin so the humidity is really high especially after the storms we have had because it’s monsoon season.

As in Kaohsiung, it has been a real delight performing the show in Taipei. Seeing the reaction of the audience to the show has been brilliant. Ian and I have enjoyed using our tiny bits of Mandarin. We can only really name the colours but in our heads we are fluent even if the audience are a bit bemused. They really seem to have loved the show as many of the parents are just as keen to get a photo with Cotton and Wrinkle. And it has been lovely hearing the names of children after the show and we are often told their western name, I met Cinderella the other day, which was nice.

On Sunday we took the metro to the end of the line and got off at Tamsui. It’s pronounced Tan-schui and is kind of Taiwan’s version of Largs. It has a huge night market, which are a massive part of Taiwanese culture. It’s basically a big street market and you can get every kind of nibble. A lot of it is deep fried but very tasty. Anything goes really. There’s sugar cane getting pulped to drink the juice and an assortment of squid, tofu and Chinese sausage. The oddest things we tried were a stuffed tofu skin, iron eggs (a kind of black rubber ball quail egg) and a skewer of ‘toffee apple’ tomatoes. There are some rather different classifications of ‘sweet’ here so sweet potato and red beans can easily appear in the middle of a sponge cake and it seems tomatoes are fair game for ‘toffee-ing’. It was actually quite tasty. As you can tell food is a massive thing here and there is such variety, it’s endless. There is a feeling of people really ‘living to eat’ in Taiwan. Particularly the tiny woman who Ian and I sat next to at breakfast and watched as she ate eleven fried eggs! This was alongside the four dinner plates, piled high with water melon slices (6 high!) and french bread. We wanted to stay and see how it would end, an explosion perhaps, but we had a show to go and do. 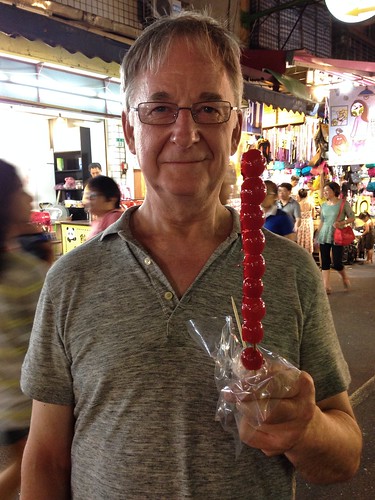 While we have been here, we have each discovered our Chinese horoscopes. Ian is a Pig, I am a Monkey and Suzie was rather disappointed to hear that she is a Snake. However, on hearing that it’s also called a baby Dragon she seemed to perk up. And Suzie, or Miss Marple as we now know her, has solved the mystery of the high pitched ice-cream van music you hear intermittently around Taiwan. After dogged sleuthing Miss M. has worked out it’s actually the bin lorry. It seems that the bin men play ‘Fur Elise’ and on hearing it, everyone appears with bags of rubbish which they each throw into the truck. Mystery solved. Suzie was last seen with a book about Lord Lucan under her arm, so here’s hopiing.

Yesterday we did the tourist thing and went up Taipei 101, the second tallest building in the world. The building is beautiful and the views of the city amazing, but perhaps what is most impressive about it is the huge ball which hangs at the top of the building and compensates for the movement of the building as it moves in the wind. Suzie was intrigued by the engineering and technology of it – I liked the fact it had been painted gold and the ropes had been made glittery. But it was amazing to see how vast the city is and to the south where Taipei would end you can see start of another downtown which is New Taipei City in the distance.

Finally, a lasting memory of the trip for us all was that we went to see a Taiwanese children’s choir sing as part of the children’s festival. The group, known as The Taiwan Children’s Ancient Ballads Troupe were performing open air, in one of the city parks. As we got off the metro it started to rain really heavily and then quickly developed into a full blown thunderstorm. As we followed the crowds into the park I started to think about the safety of walking into a dark, wet park with lightning overhead. Anyway, no-one else seemed bothered by it so we carried on. The rain was warm so it was quite pleasant and when we got there, we were all issued with bright yellow ponchos and we put up umbrellas and listened. We stood and watched as the group sang the most beautiful harmonies as the rain came down and the sky above thundered and went occasionally white – it was truly magical. Carol (our translator) told us they sing really simple lyrics about life: falling in love, finding a friend…. and food, obviously. It was unforgettable.

And now we are on a plane bound for Hong Kong our Asian adventure is over. Thank you Taiwan we have had a great time. Thanks to everyone at the festival but particularly to Cynthia and Carol who have looked after us so brilliantly. In fact Ian did a little ‘White’ drawing to say thank you for looking after us so well.